OpenStack is a cloud management system that combines computing, networking, storage and ancillary services to make virtual computers easy to manage: i.e., deletion, creation, snapshotting, templating, migration, and so on. OpenStack is not a hypervisor (such as KVM, VMWare ESX, Xen or Hyper-V), a storage system (such as VNX, NetApp, GlusterFS, Ceph, NFS, good ol' local filesystems) or virtual network product (such as Cisco Nexus or vSwitch). However, it manages all these elements into a nearly seamless cloud through its own APIs, much like VMWare vSphere. It is used to create very scalable High Availability (HA) systems. If the business desires, it can also achieve this with cheap off-the-shelf hardware to avoid high capital costs. In fact, the OpenStack folks themselves suggest no longer using RAID hardware.

I recently gained the Certified OpenStack Administrator (COA) certification. The course I took with The Linux Foundation went further than just giving enough info to pass the exam: the instructor was keen enough to go over quite a few technologies that could be adapted to OpenStack. Here are the technologies I want to explore further in this blog, including mastering some of the technologies that I have already used:
In order to get this done, I can either use a bunch of virtual machines or use metal. Since one of my goals is to try different OpenStack architectures and use it, metal it is.

The first goal will be messing around with Ceph and see what throughput I can get over different failure modes. I would be happy to compare it with GlusterFS using exactly the same hardware.


OpenStack, in most of the diagrams I have seen, uses three to four physical networks per stack. The number of nodes required will vary, of course: 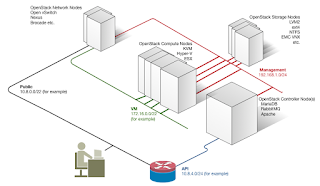 To begin with, I have only one host powerful enough to use as a compute node, so there is no need for a VM physical network yet. I am not using any dedicated network nodes to start with either, so the API and Public networks are one and the same. That leaves just the management node and my practice storage nodes. My architecture will be as follows: 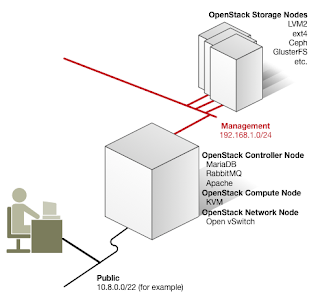 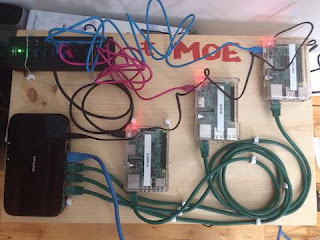 
The Raspberry Pis are headless and I like CentOS 7.


Packages installed on the controller

Before even thinking of installing OpenStack (and its required services, such as MariaDB, RabbitMQ (or 0MQ), or an http server), I want to control calvin, hobbes and susie.

Posted by George Cummings at 5:30 PM No comments:

George Cummings
IT guy by day, karateka whenever I feel like it, pianist when possible, daddy all the time. Fan of absurdist comedy. Addicted to caffeine, albeit not in the "cappuccino of life" sense of the term.